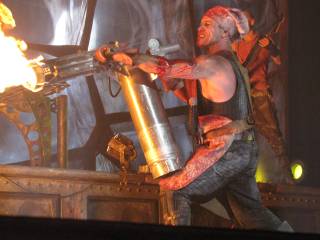 Rammstein brought the metal fury (and the fire) to the Q on Thursday. (Photo Credit: Gene Natale Jr. / 88.7 WJCU)

On Thursday 5.3.12, metal fans in Cleveland got to experience arguably the best stage show in rock music today as Rammstein made their triumphant return to Ohio via Quicken Loans Arena. Concertgoers reveled the full violent glory of the show as huge flames, fireworks, spark throwers, and even a giant foam-shooting phallus (yep!) thrilled those in attendance.

Check out the gallery from the Rammstein concert here!

It has been 11 years since the industrial metal band from Berlin, Germany last played in Cleveland. The absence hasn’t been for a lack of success, since the band typically sells out huge soccer arenas all over Europe. For some reason, Rammstein found some sense of desire in their hearts to embark on a full North American tour after testing the waters last year. Though Rammstein’s shows in Europe are usually played to larger crowds than the audience that turned up at the Q on Thursday, the Cleveland fans were no less enthusiastic for the performance than their counterparts in any other country. 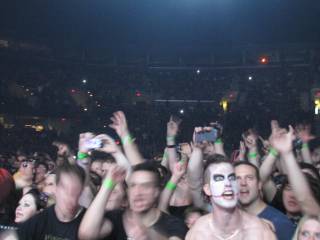 Overall, the spectacle of the show was everything that could be expected of Rammstein, and then some. Breaking with the procedure of most main acts, the band entered the arena not from behind a backstage curtain, but from the main concourse. Bassist Ollie Reidel led the group into the crowd bearing a flaming torch, while other members of the group carried flags, including an Ohio state flag.

Rammstein came out with guns blazing for the first song “Sonne” (Sun), which included some of the most visually impressive displays of pyrotechnics. In fact, there was so much pyro during the first five songs that photographers were not allowed into the photo pit until song six – to avoid any intentional ‘photog flambé’ action that could potentially occur. Overheard in the front was one of the Hall Security staff speaking to the photographers waiting to enter the pit, who stated simply, “By the time this show is over, ALL y’all gonna be black!” Flambé, indeed.

Fire was a big part of many songs, as was to be expected from a Rammstein concert. During “Asche zu Asche” (Ashes to Ashes), flaming microphone stands were used, while face-mounted flamethrowers made for an impressive display during “Feuer Frei!” (Fire Freely).

Fortunately, no one was fried or fricaseed by the flames – that is, except for keyboardist Flake Lorenz, who was on the receiving end of a flamethrower attack during “Mein Teil”! During this song, Lorenz left his post onstage, only to reappear in a giant cauldron brought forth by singer Till Lindemann. Lindemann was clad in a butcher’s apron and chef hat, covered in blood while brandishing a huge knife affixed to one end of his cordless microphone. 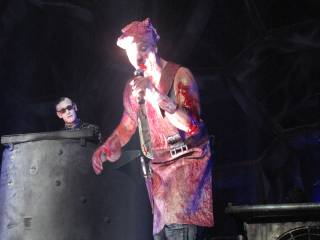 After brandishing the knife during his vocal performance, the singer created a huge fire-display with two different flamethrowing devices, to the amazement (and delight) of everyone in attendance. Lorenz, meanwhile, was safe from harm, emerging near the end of the song to run about while his clothing emitted sparks everywhere – quite the sight. 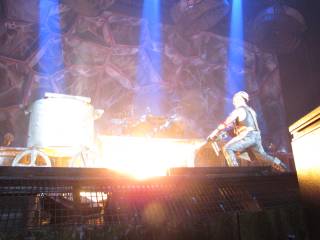 Rammstein was on point all night – Christoph Schneider’s drums were powerful,  made even more impressive by the occasional use of huge explosions set off in time with his kick drums. The group even utilized the old ‘second stage’ trick, using the flying bridge to traverse across the crowd midway through the set to rock a few jams at a stage closer to the back, thus giving those fans who were previously too far away to see anything an up-close piece of the action.

In all, the concert was nothing short of amazing. The band seemed to have a genuine love and respect for the audience, and everyone in attendance fed off of that love. Even though the studio version of the song “Amerika” includes the line “This is not a love song,” the line was removed during Thursday’s performance – perhaps Lindemann loves us, after all? Granted, the true meaning of that song may have been lost on many fans who can’t understand the German lyrics, but why spoil their fun, eh? (For a full translation of that song and others, check out herzeleid.com.)

One song that certainly needed no translation was the closer of the night, “Pussy”. The refrain, in English, describes the act of coitus with as little poetry as possible. But there was some sense of poetry in the way he mounted a giant foam-spraying funnel painted to resemble a phallus during the song, spraying his foam-love all over everyone in the first several rows. Was it love? Was it lust? Who knows – but it certainly is true that if there is ‘love for all’, that love was given and received in full-strength from Rammstein last Thursday. 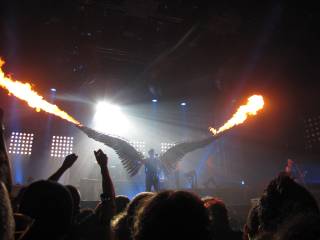